Together with local stakeholders and the University of Bremen, the foundation Manfred-Hermsen-Stiftung is carrying out measures to protect the Green Fork-moss (Dicranum viride). For the continued existence of this moss, which is of particular conservation value, the preservation of the forest climate and thus the transition between the Langhagen open-pit mine and the Nature reserve "Wüste & Glase" is of great importance. The project is cofunded by HeidelbergCement as part of its "Quarry Life Award" funding competition.

The Langhagen gravel and sand open-pit mine is closely interlinked with the adjacent Nature reserve "Wüste & Glase" and other protected areas. Between the open-pit mining site and the nature reserve, the Green Fork-moss (Dicranum viride) has been found, a protected species listed in Annex II of the European Fauna-Flora-Habitat Directive, that significantly depends on a well-preserved forest habitat and the forest´s micro-climate (Berg et al., 2009; Linke et al., 2009 & Hahne, W. et al., 2013).

As part of this project, research on the habitat characteristics of the Green Fork-moss is being conducted and key renaturation and protection measures are carried out for its continued existence. For example, non-native coniferous plantations will be converted into near-natural mixed deciduous forests, and a protective woodland edge will be planted around the forest. Furthermore, the habitats in the transition zone between nutrient-poor waterbodies of the opencast mine, sparse grassland and steep slopes, and the forest with its damp and cool climate, will be maintained and ecologically enhanced.

The rare combination of such different habitats provides space for a high diversity of species and hence, by enhancing and maintaining these habitats, the ecological value of the landscape surrounding the gravel pit and the Nature Reserve will be improved on the long run. The woodland edge preserves the forest’s microclimate and will reduce disturbing influences from the mining activities. Thus, the project makes a crucial contribution to the preservation of flora and fauna, especially the Green Fork-moss, and will create a more beautiful landscape with enhanced biodiversity.

Formation of a forest belt

For the smooth transition from the forest to the open land, area-typical shrubs such as hawthorn, dog rose, dogwood and common spindle have been planted in a near-natural form from early April 2022: they are placed in ascending height from the open land to the forest trees. They are planted in a meandering manner with many bulges rather than in a straight line, along the edge to the open land. A game fence protects the young plants from browsing by larger game. A new perch offers birds of prey a good overview for hunting rodents, which could also harm the young plants.

In June, we began clearing areas of ecologically valuable arid grassland of emerging shrubbery and trees in order to improve the conditions of the characteristic communities that have become rare, including carline thistle, dwarf everlast, and characteristic grasses. 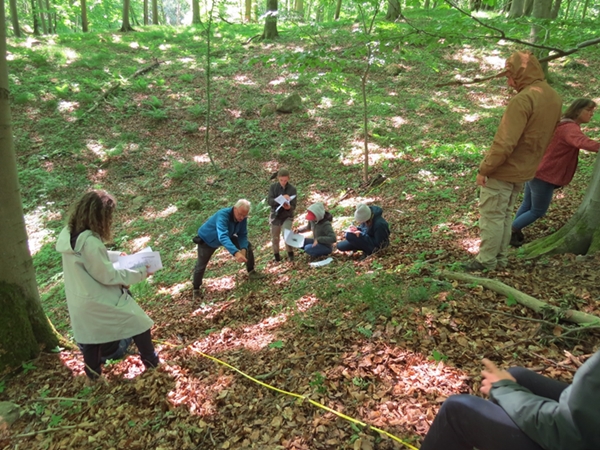 Students from the University of Bremen were on site for several days as part of their ecology studies. They conducted vegetation surveys in the specific areas of "forest" and "forest edge" and took soil samples for laboratory analyses. The resulting data will be supplemented by microclimatic values from installed data loggers, and will be used for comparison with future data surveys to visualize changes in biotic and abiotic conditions that enable moss growth. 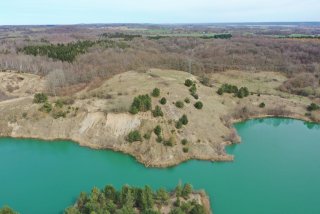